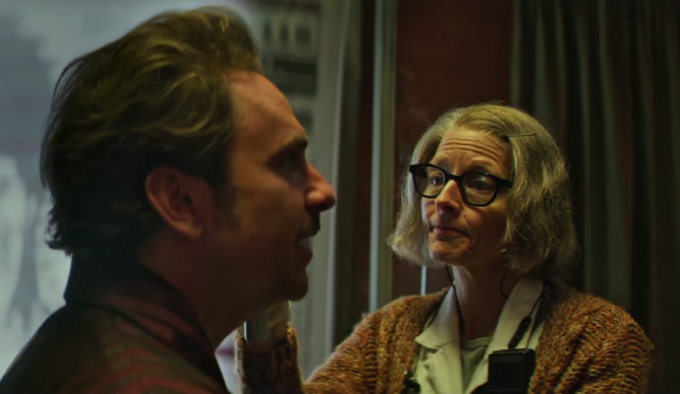 This film had a great trailer, a great cast, and a great concept, but is it another disappointment from this year?

We’re in Los Angeles in 2028, and Jodie Foster runs the longstanding Hotel Artemis, a safe haven and hospital for criminals of all kinds (except paedophiles, serial killers and terrorists).  The city is barely surviving its worse ever riot, and when a bank robbery goes side-wards, Sterling K. Brown is forced to take himself and his brother to the Artemis.  They’re not the only visitors and are quickly tangled up in a whole mess of criminal plotting.

Going into this film you can convince yourself that it’s going to be a simple thriller, and you would be wrong.  The film doesn’t revolve around one thing, one McGuffin, or one plot device.  There’s loads of them, and for the most of the film writer and director Drew Pearce is trying to set them up.  So that means quite a baggy middle, where your expecting cheap thrills but getting a lot of chatting, and emotion.  Thus, the film almost becomes a massive anti-climax, however thanks to a 94-minute run-time and some surprise ultra-gore the last 20 minutes are entertaining.  Which was a huge relief, because honestly I thought it was never going to get going.

During that baggy middle there is a strong attempt for an emotional connection through the Jodie Foster character.  She’s likeable, and it’s nice to see Foster again, but her story was too familiar and predictable.  There’s a twist involving her past that wasn’t needed, and you don’t really care about her demons until the very end.  And fair enough to Pearce because it does get more touching as it goes on, it was just a bit dull?  A lot of the routes the film goes down were unoriginal, including some of the action, which lets the good concept down.  It’s like: here’s this exciting idea, about future criminal cultish stuff, but let’s just fill this world with things that everyone has seen in every crime movie ever.

Thankfully Pearce elevates his weak writing with some competent film-making.  The action isn’t shot amazingly, but it’s exciting enough.  Pearce uses violence well – it’s extremely strong and used in short bursts.  I was also a fan of the films look, especially when it changes its colour palette towards the end.  The characters are fun and well played.  Goldblum in anything is great, Charlie Day was very funny and Dave Bautista continues to impress.  Some critics have called the film lacklustre, and I would disagree with that because of how enjoyable little individual moments were. I was a bit confused by the films messages, and the film gets caught between being political and silly so who knows what they’re trying to say.  Overall the film is likeable, short and full of watchable people.

Is it worth the price of a cinema ticket?